Today it’s 45 degrees out.  Too nice to avoid the fresh air.  So I let the cats out on the balcony, and I tried my hand using the rule of thirds.

I realized it’s a lot harder in practice than in theory.  I understand the theory.  But to think about it in the midst of shooting is really difficult.  Especially with clueless models! ;0 I call this collection “Cabin Fever”

So Cody is in the left, bottom third.  The paw prints are on the left.  The ground has the horizontal lines to add interest.  And, my husband’s beer is on the bottom right, I wish I had moved that. 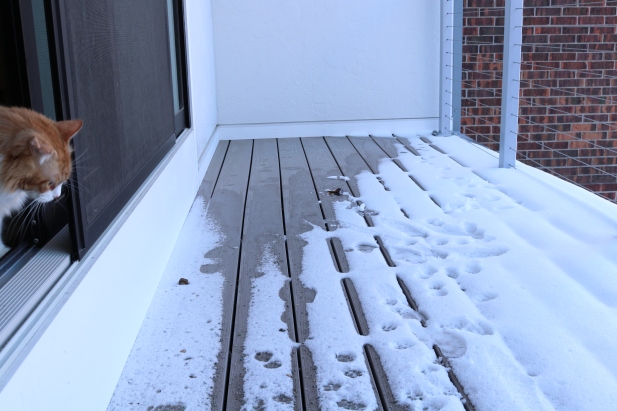 This one wasn’t as successful.  My subject moved backward so he wasn’t as much in the shot as I wanted.

Minus the blurriness, this one was close.  I liked the idea of the cat being right between indoors and out.  I like the paw prints and vertical lines.

Poor lighting, and not level.  The cat is a little too close to the center, and I wish I had gotten lower so he appeared bigger.  He looks like such a runt, ha.

Practice makes progress, so I’m glad I had a chance to work on it today.

This is a text widget. The Text Widget allows you to add text or HTML to your sidebar. You can use a text widget to display text, links, images, HTML, or a combination of these. Edit them in the Widget section of the Customizer.
Loading Comments...
Comment
×
%d bloggers like this: